Foreword: This franchise has really transcended the childrens genre of anime, game and idea that pokemon has yet to discover. I thoughroughly enjoyed the hardships throughout this game, allusions to dark thoughts and overall ending. With Digimon Tri, Hackers Memory and Survive quickly on the horizon I am extremely excited with what is to come next. Bring on the heartbreak and tears!

Fans of the Digimon Cyber Sleuth series will absolutely froth on the idea of this new installment, I know this because I am not to afraid to admit I did. All over the bloody floor. Grab your digivices so we can get this review under way.

This time we are not a cyber sleuth solving mysterious cases and happenings for Kyoko’s Detective Agency but are hackers of the dark part of Eden doing jobs for those who hire us. It’s basically like hiring an assistant or handyman to get something done for you and is an interesting concept after the last game. It’s kind of thrilling playing both sides and seeing things from the view of a hacker. As the protagonist we are periodically introduced to the members of the small hacking group, Hudie. There is the mischievous ladies man, Chitose, the tsundere mastermind hacker, Erika, and the leader of the group being the strong willed Ryuji who also happens to be Erika’s older brother. At the start of this game I didn’t expect to fall in love with these characters in the way I did, I found myself caring deeply about their hardships, weaknesses and wellbeing as they end up getting caught in an imminent shit-storm as the events of the first game overlap with their own story. It is an interesting position to be in to know what is happening in their world but not fully knowing what will come next for these smaller pieces in the overall story. Love these two way too much.

All the same charms and missteps are included in a very similar package to its 2016 counterpart. The quests felt a tad more involved with side quests which built the relationships of characters within the world. However, these characters, such as the Occult Club and Yu, had little relevance to the overall plot. It would have been nice to see how the main characters story affected the world around them as the original did. The beautifully crafted main cast was given a great disservice as this installment felt extremely rushed with chapters at the beginning of the game feeling like filler and the juicy, intriguing and fun moments being left as an after thought until the very last chapters, all of which came and went very quickly.

We are rushed through all these heavy hitting fights and emotional moments and I felt for the characters, but thirsted for so much more, it all felt bundled into the last 10 hours. The slow starting hours of 40+ gameplay truly felt wasted lacking both substance and relevance in relation to the rest of the main casts story. The story crafted characters beautifully in the finale, but within the first few chapters I wondered what the point of this game was as it didn’t really feel like anything was accomplished. I ended up asking myself why I wasted time on the first half when the second was so dynamic. It felt as though there was tedious content where there didn’t need to be any which holds it back from being an even greater experience than it was. I did appreciate the links between the first game and Hackers Memory as the two stories intertwined with one another, a welcome addition for fans of the series. However, it left too many questions unanswered and felt quite unsatisfying and underwhelming as the ending didn’t tie up any loose ends.

The battle system remained the same which was welcome as it still felt dynamic and fun, if it ain’t broke don’t fix it. The animations for unique attacks in battle were also quite cool and diverse across the board which each Digimon’s fighting style feeling unique. Domination battles were also a welcome addition to diversify combat but found myself winning these extremely easily and wanted more of a challenge.

However, as a complete and utter Digimon fanboy I could never be too negative on this game for too long a time. There were more Digimon to discover than ever before and the animation remained just as cool as the first game. I loved being able to take a companion on raids and build a relationship with the characters that you wanted to along with you. Being able to chose the dialogue responses was a nice touch. Even though they were sparing I loved the cameo’s from the first games characters and their relationships with the Hackers Memory team, I’m just a sucker for mateship and nostalgia. The brilliant soundtrack accompaniment and voice acting was also spot on with the anime style animation scenes having me absolutely frothing for more, I strongly believe that this story should be the basis for the next Digimon anime because it was just beautiful. I just wanted more!

My highlight of this Digimon game was the ending in which Erika sacrifices herself for her friends and family. A true display of loyalty, kinship and love which was a complete juxtaposition of her character at the beginning of this game. Throughout the last few chapters, the ending was quite predictable and I felt a little unsatisfied without the happily ever after, the moment that made me lose my marbles was when our protagonist cries as he has the only Hacker’s Memory of Erika’s life. We both shared tears so I think that this game was successful in delivering what it was meant to, ALL I WANT IS FOR THEM TO BE TOGETHER THOUGH DAMMIT. Also, Hudiemon is an extremely good looking Digimon and picked her straight up in new game plus. She’s kind of a more boujee, better looking Kazemon rip off but still a cute butterfly girl I guess. 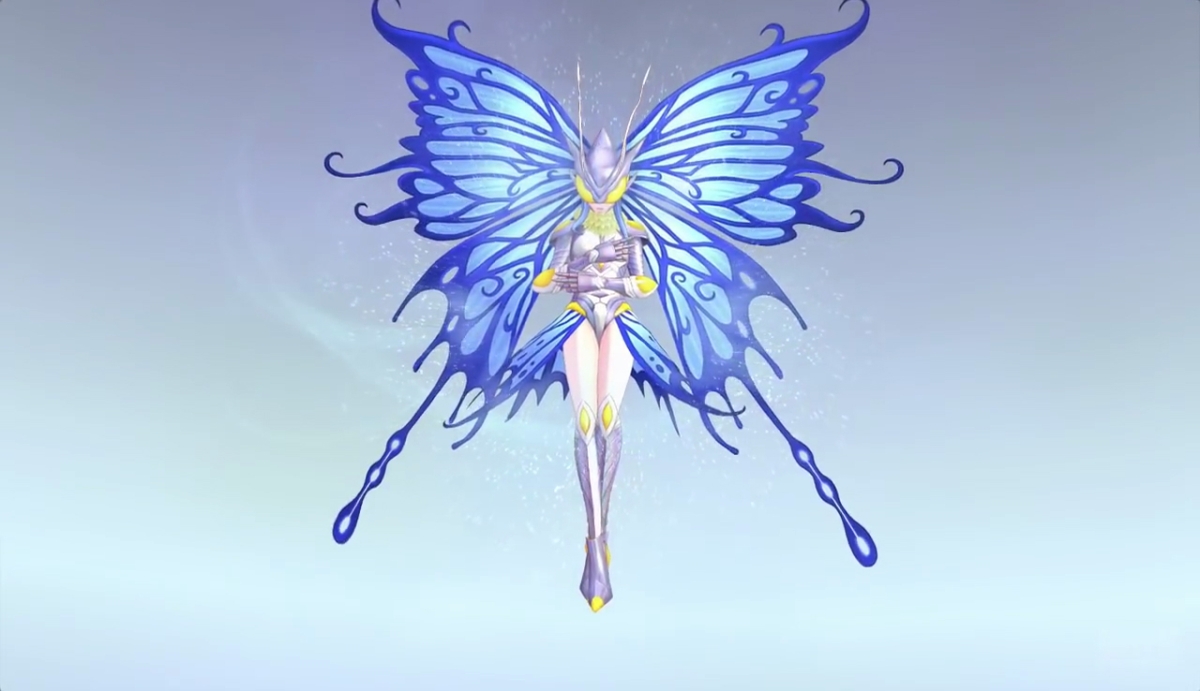 Hudiemon in all her glory.

I love Digimon which is why I think I wanted more out of this game. I can definitely see a sequel to this story coming where the Hudie team takes their adventures to the digital world and start a whole new adventure, I know that’s a lot to ask for but I think it’s achievable. We haven’t had adventures to the digital world with a main cast like Cyber Slueth and Hackers Memory, it would be extremely exhilarating to have this kind of story manifest with all of the variables of the digital world. I guess we will just have to wait until Digimon Survive surfaces in Australia.