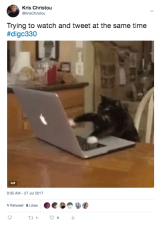 Upon my arrival to digc330, I expected to see anime posters lining the walls, cosplayers sitting all around me and (hopefully) other like-minded otaku‘s and Japanophiles who enjoyed everything Japanese. Oh boy was I wrong.

Reflexivity in the context of research practices would be the main focus of this week, in relation to a film we were asked to watch. The class was first introduced to this paradigm of research when we were told that Gojira (1954) was the text we were studying and livetweeting as the film progressed. Initially I thought that it would be extremely similar to the exuberant and satirical anime that I enjoy watching. However, the modern Japanese style and conventions I was familiar with would not be appearing in this film.

The film is from the 1950s, black and white, poor sound, laughable acting and somewhat hilarious special effects. However, what most film reviewers critique about films in modern day is how entertaining they are due to the action, plot, action, special effects, action, characterisation and most importantly action. This got me thinking about the actions of individuals and the plot itself.

In 2016, action movies were in the top three all time highest grossing films, these being modern films made at least 40 years after Godzilla.

The poor special effects and quality of sound/recording allowed me to focus on the plot, characterisation of protagonists, relationships of these characters more and the real horror of the situation, that these individuals were in. It transported me into their world, which is outstanding for any modern film, let alone a film which is over 60 years old. It allowed me to contemplate on the notion of films being too ‘action packed‘ and the idea of ‘action porn‘ in films now. What I have discovered is, unlike modern kaiju movies, Godzilla remains relevant and artistic due to its story, real reactions from metaphorically real situations and great cast of memorable characters such as Emiko, Serizawa and Ogata.

I was deeply engaged with the notion that this film was a horror film for the Japanese audience, that these scenes of a toy lizard destroying buildings and killing families was tremendously terrifying. 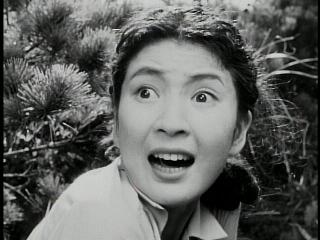 Emiko has a plethora of scenes where she screams. My interpretation of this is that she screams at the horrors which face a future of war, death and terrifying events. Source.

Scenes of buildings being knocked over, bloodcurdling screams and women and children praying and wishing a quick death is excruciatingly real and tremendously difficult to watch. The word ‘real’ is not a synonym used for many films in the modern industry, and I never thought i would be relating this word to the film Godzilla.

It is also interesting to discuss the notion of how films are perceived to be ‘works of art’ now in comparison to in the 1950s. These effects which look horrid to my 1080p HD craving eyes would have been excellent, exuberant and most importantly, horrifying for viewers.

The live-tweeting (however distracting it was) also allowed my knowledge about the culture and history of this film and its connection to horrific events such as World War two and Japans disastrous nuclear attacks was extremely confronting. As well as memes. Yes lots of dino and lizard memes. What colour dress is Emiko wearing? We will never know.

My knowledge of different Japanese culture platforms and mediums have expanded. It has transformed my perceptions from being purely an otaku to an intrigued student, willing to learn more about the culture then just cartoons dancing around a classroom eating. I am extremely excited and curious for this class to break down my preconceived notions of what truly is ‘Digital Asia’.